In this article we will discuss about the genetics of development of plants, explained with the help of suitable diagrams.

It is a dicotyledonous angiosperm, ideal for the study of flower development, a current focus of attention. Flowers have an arrangement of repeated units not unlike the segmentation found in fruit flies (Fig. 45.17).

Flower development, takes place in two phases, floral induction and pattern formation. In floral induction, the shoot apical meristem set aside a floral meristem. The organ primordia are then generated. These are four primordia, in the form of four whorls, that make up a flower (Fig. 45.18). 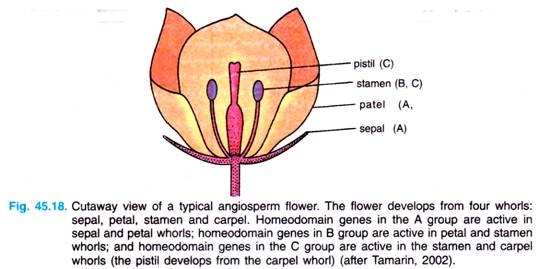 The genetics of development in plants is studied by mutational analysis, selective ablation (removal or killing) of cells during development, and other techniques used in animal studies.

Investigators have isolated many genes which affect the sequence of steps of floral induction and pattern formation. The first stage to be controlled in floral induction is its timing. That is, flower formation usually occurs at a specific time in the life cycle of a plant, affected by environmental cues (day length, temperature). In Arabidopsis, at least three dozen genes have been isolated that affect the timing of flower formation.

These genes include CONSTANS, a late flowering gene, EARLY FLOWERING 1, an early flowering gene and GIBBERELLIN INSENSITIVE, a gene for late flowering only in short days (autumn). The gene CONSTANS codes for a transcription factor and its expression is increased in response to light.

The next stage in floral induction is generating floral meristem at the point where a flower will form. At least five genes are known that grant identity on floral meristem (floral meristem identity genes); when mutated, these genes result in either shoots instead of flowers or in highly abnormal flowers.

SUPERMAN (SUP) is an example of a cadastral gene in Arabidopsis that plays a role in specifying boundaries for organ identity gene expression. Three classes of organ identity genes, i.e., A, B and C are necessary to specify the four whorls of floral organs (Fig. 45.18 and Fig. 45.19;). 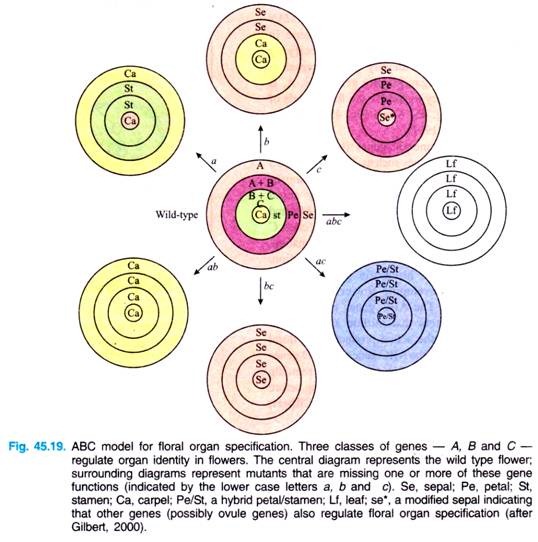 They are homeotic genes (but not HOX genes) and include genes such as AP2, AGAMOUS (AG), AP3 and PISTILLATE (P1) in Arabidopsis. Class A genes (AP2) alone specify sepal development. Class A and Class B genes (AP3 and P1) together specify petals.

Class B and class C (AG) genes are necessary for stamen formation, class C genes alone specify carpel formation. When all of these homeotic genes are not expressed in a developing flower, floral parts become leafless.

The ABC genes code for the transcription factors that initiate a cascade of events leading to the actual production of floral parts. In addition to the ABC genes, class D genes are now investigated that specifically regulate ovule development. The ovule evolved long before the other angiosperm floral parts.

The ABC model is like the model of action in Drosophila’s homeotic gene clusters, which acts sequentially, controlling development along the head-to-tail axis of the fly. It appears that genetic control of floral development is highly conserved across angiosperms, the dominant plant group. 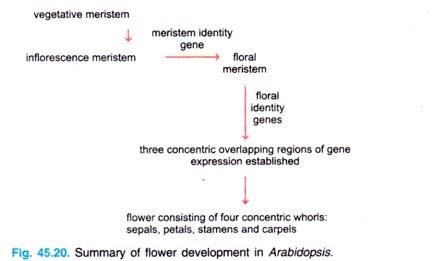 Here, we can consider an example of a homeotic gene, the AGAMOUS (AG), a gene of the C group required for the development of stamens and carpels. Expression of this gene takes place in the third and fourth whorls of the flower, the stamen and the carpel whorls. After its expression in the appropriate whorls, AGAMOUS is repressed.

Its repressor is another gene, CURLY LEAF. When the product of CURLY LEAF was compared with the protein sequences from Drosophila, it proved to have similarities in amino acid sequence with a gene in Drosophila called Enhancer of zeste. This gene is also a repressor of a homeotic gene, but in fruit flies. 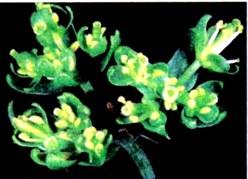