The following two purposes can be served by a steam power plant:

a. To produce electric power.

b. To produce steam for industrial purposes besides producing electric power. The steam may be used for varying purposes in the industries such as textiles, food manufacture, paper mills, sugar mills and refineries etc.

The steam power plants may be classified as follows:

This type of power station is run by a manufacturing company for its own use and its output is not available for general sale. Normally these plants are non-condensing because a large quantity of steam (low pressure) is required for different manufacturing operations.

In the condensing steam power plants the following advantages accrue:

(i) The amount of energy extracted per kg of steam is increased (a given size of the engine or turbine develops more power).

(ii) The steam which has been condensed into water in the condenser, can be re-circulated to the boilers with the help of pumps.

In non-condensing steam power plants a continuous supply of fresh feed water is required which becomes a problem at places where there is a shortage of pure water.

Refer to Fig. 12.2. The layout of a modern steam power plant comprises of the following four circuits:

The brief description of these circuits is given below:

Coal arrives at the storage yard and after necessary handling, passes on to the furnaces through the fuel feeding device. Ash resulting from combustion of coal collects at the back of the boiler and is removed to the ash storage yard through ash handling equipment.

Air is taken in from atmosphere through the action of a forced or induced draught fan and passes on to the furnace through the air preheater, where it has been heated by the heat of flue gases which pass to the chimney via the preheater.

The flue gases after passing around boiler tubes and super-heater tubes in the furnace pass through a dust catching device or precipitator, then through the economises and finally through the air preheater before being exhausted to the atmosphere.

In the water and steam circuit condensate leaving the condenser is first heated in a closed feed water heater through extracted steam from the lowest pressure extraction point of the turbine. It then passes through the deaerator and a few more water heaters before going into the boiler through economiser. 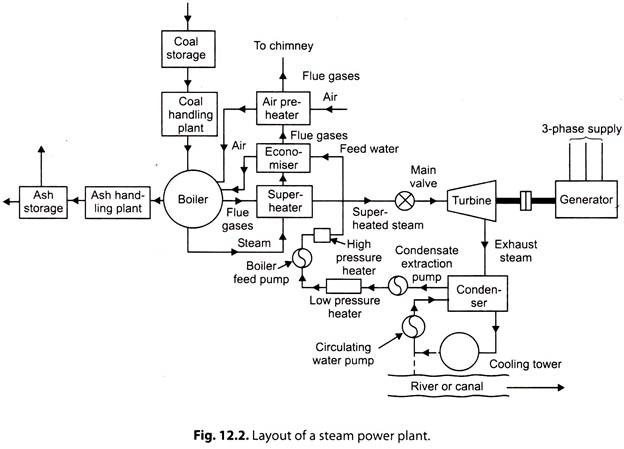 In the boiler drum and tubes, water circulates due to the difference between the density of water in the lower temperature and the higher temperature sections of the boiler. Wet steam from the drum is further heated up in the superheater before being supplied to the primemover.

After expanding in high pressure turbine steam is taken to the reheat boiler and brought to its original dryness or superheat, before being passed on to the low pressure turbine. From there it is exhausted through the condenser into the hot well. The condensate is heated in the feed heaters using the steam trapped (bled steam) from different points of turbine.

A part of steam and water is lost while passing through different components and this is compensated by supplying additional feed water. This feed water should be purified before hand, to avoid the scaling of the tubes of the boiler.

The cooling water supply to the condenser helps in maintaining a low pressure in it. The water may be taken from a natural source such as river, lake or sea or the same water may be cooled and circulated over again. In the latter case the cooling arrangement is made through spray pond or cooling tower.

A modern steam power plant consists of the following components:

The essential requirements of steam power station design are:

5. Minimum losses of energy in transmission.

6. Low cost of energy supplied to the consumers.

The above essential requirements depend to a large extent on the following:

(i) Simplicity of design.

(ii) Subdivision of plant and apparatus.

(iii) Use of automatic equipment.

The following points should be taken into consideration while selecting the site for a steam power station:

a. Availability of Raw Material:

Modern steam power stations using coal or oil as fuel require huge quantity of it per annum. A thermal power plant of 400 MW capacity requires 5000 to 6000 tonnes of coal per day. Therefore, it is necessary to locate the plant as far as possible near the coalfields in order to save the transportation charges.

For these reasons a considerable amount of coal must be stored at the power stations, these results in:

(ii) increased space required at the site of the plant for the storage,

(iii) losses in storage, and

If it is not possible to locate the plant near the coalfields then the plant should be located as near the railway station as possible. Even if this is not possible then at least arrangement should be made for railway siding to the power plant so that the coal wagons can be shunted from the station to the site of power plant. This applies to plants using oil as fuel, as well.

b. Nature of Land:

Considerable area is required for the power stations. The cost of the land for that purpose should be reasonable. The large plants in the heart of big cities and near the load centre are not economical as the cost of land is very high.

Steam power stations use water as the working fluid which is repeatedly evaporated and condensed. Theoretically there should be no loss of water, but in fact some make up water is required. Besides this, considerable amount of water is required for condensers.

A large quantity of water is also required for disposing the ash if hydraulic system is used. It is, therefore, necessary to locate the power plant near the water source which will be able to supply the required quantity of water throughout the year.

Availability of proper transport facilities is another important consideration in locating the thermal power station. It is always necessary to have a railway line available near the power station for bringing in heavy machinery for installation and for bringing the fuel.

The ash handling problem is more serious than coal handling because it comes out in hot condition and it is highly corrosive. Its effects on atmospheric pollution are more serious as the human health is concerned. Therefore, there must be sufficient space to dispose of large quantity of ash.

In a power station of 400 MW capacity 10 hectares area is required per year if the ash is dumped to a height of 6.5 metres.

During construction of plant enough labour is required. The labour should be available at the proposed site at cheap rate.

h. Size of the Plant:

It case of large plants, the costs of transporting enormous quantities of coal and water are considerably high; therefore, the plant must be located near the pit head provided the required water quantity must be available as near as possible. The large plants should be located close to the railroad offering adequate services. The economic significance of the large plant with small one is much greater than the mere ratio of size.

A power station must be located near the loads to which it is supplying power. However, a plant cannot be located near all loads. As such C.G. of the loads is determined with reference to two arbitrarily chosen axes this C.G. is known as the load centre (see Fig. 12.3.)

The power plant should be located, as far as possible, near the load centre in order to minimize the cost of transmission lines and also the losses occurring in them.

In order to avoid the nuisance from smoke, fly ash and heat discharged from the power plant, it should be located far away from the towns.

The choice of the site should allow for economical extensions consistent with the estimated growth of load.

l. Consent of Town Planning Department must be sought in case urban area is selected for the purpose.