In this essay we will discuss about Fishery:- 1. Introduction to Fishery 2. Different Types of Fishery 3. Collection of Spawns 4. Potentiality in West Bengal 5. Success in India.

Throughout the world an all-out effort is being made to increase the production of food. As fish is a good source of protein and as it is more nutritive and palatable than vegetable foods much attention has been paid on fishery.

Fishery includes a broad perspective. Ordinarily the term fishery means culture and propagation of edible and marketable fishes. In a broader sense it includes the exploitation of many aquatic animals other than fishes.

Judicious exploitation of fishes, prawns, shrimps, crabs, sharks and various molluscs like oysters, dolphins and whales from their natural habitat for the human consumption and benefit comes under the domain of fishery. In a broad sense, fishery signifies the exploitation of natural resources in water.

Depending upon the habitat of fishes fishery may be divided in the following ways:

Exploitation of the fish-resources of the sea comes under the purview of marine fisheries. The world’s most abundant fishing grounds is located within 320 km (200 miles) of the shore.

In a world that faces widespread malnutrition and insufficient food supply, the sea provides an annual catch of 75 million tons and as such presents a vital source of protein for millions of people. Moreover, it forms an important economic resource for many coastal states.

For a long time the chief aim of marine fishery was to capture the fish from the sea and to market the edible fishes. Between 1948 and 1986 the global fish catch has quadrupled because of highly efficient harvesting methods including sophisticated detection and process­ing equipment aboard ship.

Now it has been realised that this over-exploitation is outstrip­ping the animal life of the sea to replenish itself. Scientists report that there has been dras­tic decline in the catches of certain species of herring, sardine and salmon and many more are under the threat of over-exploitation. This demands a sound management and conserva­tion of coastal fisheries.

It has now been agreed by the fishing countries that marine fishery should be man­aged in a way that prevents both over and under utilisation of fish stock. Harvesting should be made after evaluating the ‘maximum sustainable yield’.

Maximum sustainable yield is the optimum catch, the maximum amount of fish that can be taken on a sustained basis with­out diminishing the reproductive capacity of the species or adversely affecting associated or dependent species.

Inland fishery can broadly be subdivided into:

(a) Freshwater fishery and

The aim of this fishery is to culture and exploit fish resources from the great river systems of the country and from the vast networks of irrigation canals, tanks, lakes and reservoirs.

This fishery includes culture and exploitation of fishes from the different Bheris in the coastal regions, estuaries and ponds and jheels of the deltaic regions.

One of them is:

(i) Capture fishery and the other is

Capture fishery aims at the management and capture of fishes from the rivers, estuaries and lakes. But capture does not mean over harvesting. It is done with an eye to conservation and at the same time rational exploitation of the fishes so that sustained productivity of the fishes is main­tained.

It includes the practice of rearing fishes in small impounded water such as ponds, jheels, etc. and to capture and mar­ket the fishes when they reach the desired length and weight.

Pisciculture needs two basic practices. They are (a) collec­tion of spawns (Dim pona) and (b) nourishing, rearing and stocking of fingerlings.

The method of collection and distribution of spawns is more or less an well-organised industry. In West Bengal it is an age-old prac­tice to collect spawns of major carps mainly from the Ganges river system near Murshidabad district. The carps do not lay eggs in running water.

i. The resources for spawns becomes limited as collection spots remains localised in certain pockets.

iii. Collected spawns may be a mixture of wanted as well as unwanted and uneco­nomical fish seeds.

In order to avoid those difficulties the pond culture division of the central inland fisheries research stations and similar other organisations practice a process called induced breeding. For this an implement called ‘Hapa’ is used. The Hapa is more or less like a mosquito net. It is immersed in pond water with its roof at the bottom and free ends up.

Thus an enclosed area is obtained. Within this area a single mature female which has been previously injected with extracts of pitu­itary glands taken out from other fishes and two mature males are released. These fishes breed and the female lays eggs. The eggs are collected easily and are allowed to hatch.

Indigenous method of collection of spawns:

In Midnapore district of West Bengal and Chittagong in Bangladesh an indigenous method for collection of spawns of major carps has been developed. It consists of a specially constructed pond encircled on one side by an inclined upland, called ‘Dhal’. The opposite side is a low land. The low land is connected with drainage canals, known as ‘Bulan’.

The openings of these canals are guarded by a specially built bamboo net or sluice, known as ‘chera’ which prevents the escape of the carps. The pond is stocked with mature male and female carps. During rainy season the low land bordering the ponds become flooded. The female carp lays eggs on the low land and the eggs or hatchling collec­tion thus becomes easy.

Nourishing, rearing and stocking of finger­lings:

The collected spawns are now transferred into ‘Nursery tanks’. A nursery tank is about 20 metres in length and 15 metres in breadth, and contains water 1 metre deep. The nursery tanks are kept ready by placing appropriate amount of cow-dung, oil cakes, etc., before transferring the spawns. This treatment helps the protozoa and crustaceans (Zooplanktons) to grow well. These serve as food for the grow­ing fingerlings.

A stocking pond is about half an acre or 2025 sq. m in area and contains water about 3 metres deep. Amongst the major carps Catla is surface feeder while Labeo and Cirrhina are bottom feeder. It has been found to be economical to grow them together because competition for food amongst them is remote.

Essay # 4. Fishery and its Potentiality in West Bengal

In West Bengal operation of fishery is done both in inland water bodies and in the sea. The state owns a large number of rivers, canals, tanks, jheels which abound in many edible fishes. Major carps like Labeo rohita, L. kalbasu, L. gonius, Catla catla, Cirrhina mrigala are the prized and most wanted fishes in West Bengal.

It may be pointed out that the three jeol fishes named last are much in demand as diet for infants and patients and that they are quick breeders requiring little expenditure towards rearing.

The salt marshes or bheries of 24-Parganas pro­vide extensive grounds for the culture of a vari­ety of fishes belonging to the genus Mystus, Arisus and Mullets like Mugil parsia, M. tade, Lates calcarifer, Gudusia chapra, Glossogobius sp., Polynemus sp., etc. and some characteris­tic members of the genus Palaemon.

Hilsa (Tenualosa) ilisha is a much sought after fish in West Bengal. It is a migratory fish and for breeding during rainy season it ascends up the river Ganges and the Padma. The great river system of West Bengal is good sources for such carnivorous fishes as Notobterus chitala, Notopterus notopterus, Mystus seenghala, Wallagonia attu, etc.

From the dams and reservoirs constructed in connection with multipurpose river valley projects (Damodar valley project, Mayurakhsi project, etc.) an annual catch of about 150 tons is obtained. The fishes that are reared in these dams include Catla catla, Cirrhina mri­gala, Macrones seengala, M. aor, Silonia silonies, Wallagonia attu, etc.

During rainy season water is retained for some time in the- paddy field. This retained water is utilised as a fishing ground. It is to be remembered that poisonous insecticides are not to be used in such grounds and an increase (about 50%) in the use of manure is to be done in such culture.

Essay # 5. Success of Fishery in India

India’s total fish production was 2.52 mil­lion tons in 1983 as against global production of 90 million tons. This is indeed a poor perfor­mance considering the vastness of the fish resources of India. In 1972, however, the inland fisheries in India ranked third amongst the different countries of the world. (World produc­tion 9.35 million tons and India’s production 0. 66 million tons).

West Bengal in the same year ranked first amongst the other Indian states with an yield of 228 thousand tons of fish. There is an ample scope in India for the increase of fish production.

This can be done by:

This can be done by reclaiming the inland water bodies.

The different prob­lems in successful pisciculture can be reduced by making the following:

(a) Examination and evaluation of the physical features (salinity, pH, tempera­ture).

(b) Check-up of the presence or absence of organic matter in water and examination of their nature,

(d) Examination of the nature of food and food-habits of different fishes,

(f) Record of actual breeding time and finding out of spawning ground,

(g) Study of the nature of vegetation and animal population in water, their density and mutual relationship,

(h) Knowledge of fish diseases and enemies of fishes,

(i) Enact­ment of legislation for prevention of early destruction of immature stages and gravid females- by the people and education of the fishermen.

There is an ample scope for the improvement of fishing implements and gears. The materials used in the tropical fish net can be replaced by nylon threads which give more strength and durability. Arrange­ments for quick transportation and refrige­ration can prevent unnecessary wastage of marketable fish.

In deep-sea fishing the ships are to be made self-contained ‘fishing factories’ capable of spending months at sea. Highly efficient harvesting methods including detection and processing equip­ment aboard ship are to be arranged.

iv. Preservation and processing of fishes:

Better arrangements to avoid spoiling and decomposition can be made by preserva­tion which is done with the catch by removing the slime, mud and blood-stains and subjecting them to live drying, dry and wet salting, smoking and refrigeration.

Pollution of water specially of inland water by factory wastes from factories are to be checked as such pollution brings heavy mortality of fishes.

Introduction of exotic fish from other countries and acclimatiza­tion of some of them by trial can increase fish production. The sport fishes like brown or rainbow trout have been intro­duced in the lakes of Kashmir, Himachal Pradesh and Kumaon where they have been become successfully established and offer good sport for anglers.

The minor carp Cyprinus carpio imported from Bangkok are thriving successfully in India both in uplands and low-lying areas. Similar is the case with Tilapia Mozambican or ‘American koi’ brought to this coun­try from Africa. Being hardy and prolific breeders they have been able to minimise some of the great demand of fish.

The fishes, in addition to their importance as food, provide a number of by-products. The important ones amongst them are oil, poultry and cattle food, fish-meal and manure. Crude and concentrated shark liver oil extracted from the liver of sharks is a rich source of vitamin A. 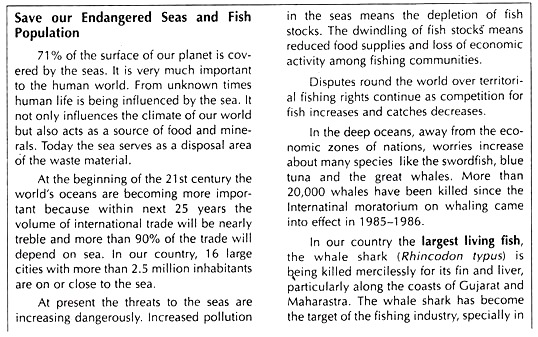 Essay on Jaundice: Meaning, Causes and Types
Essay on the Sun