Cancer is characterized by uncontrolled growth and division of certain body tissues, so forming a tumour, so it is also called “Mitotic Run Amok”. It is more common in people between 40 to 60 years of age. It is one of the chief killers of modem world so is one of the most dreaded diseases of human beings.

According to estimates, every year about 10 million people throughout the world are diagnosed as having cancer. Cancers cause about 4 million deaths annually at the world level which account for about 10% of all deaths. In India, more than one million people suffer from cancer and a large number of them die from it annually.

1. Cancers show uncontrolled mitotic divisions of cells causing unorganized growth due to breakdown of those regulatory mechanisms which control and regulate the growth and differentiation of cells. The rate of cell division is much higher than that of normal cells (e.g., gut lining cells divide after 36 hours; skin cells after every few days, red blood cells after every few weeks).

2. Cancer cells lose the normal feedback controls that prevent excessive growth, so these cells grow much more than the normal cells.

3. Due to uncontrolled growth and division of cells, a tumour (also called neoplasm which literally means new growth) is generally formed. However, all tumours are not cancerous. Further, no tumour is formed in leukaemia (blood cancer).

4. These cells have less survival capability than the normal cells.

5. Cancer cells are far less adhesive than the normal cells so these generally wander through the tissues to cause cancerous growth in different parts of the body.

6. Most of these produce angiogenic factors which stimulate the growth of blood vessels to supply more nutrients required for cancer growth. Cancer calls starve the normal cells by competing for vital nutrients.

7. Cancer cells do not undergo differentiation.

8. Cancer cells do not show contact inhibition as shown by normal cells and which inhibits their uncontrolled growth.

9. These cells have high invasiveness.

10. In cancer cells, cytoskeletal structures like microtubules and microfilaments tend to be disorganized.

Etiology is the study of causes of a disease. Cancer is neither contagious nor hereditary disease. The physical, biological and chemical agents, which induce cancer growth, are called carcinogens (Table 8.20). 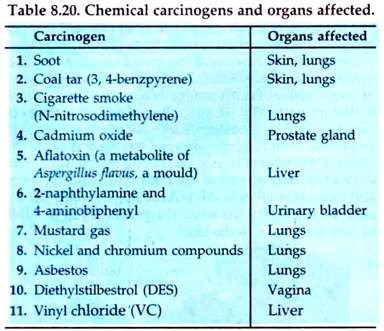 1. Ionising radiations like X-rays, gamma-rays and particulate radiations from radioactive substances are known to rupture DNA strands and induce mutations to cause neoplastic transformation and cancer e.g., excessive exposure to sunlight may stimulate the development of skin cancer in farmers.

Evidence for the carcinogenic effect of X-rays is documented that the incidence of leukemia is about ten times in radiologists than in other physicians. Japanese people exposed to radiations released from World War II nuclear explosions showed five times the incidence of leukemia than the rest of the population. Even non-ionising UV-radiations cause DNA changes leading to neoplastic transformation.

2. Physical irritants like certain foods, which cause continued abrasion of the linings of the intestinal tract, are also carcinogenic. Kashmiris use kangri to keep themselves warm but is known to cause abdominal skin cancer due to constant heat exposure.

3. Chemical agents like caffein, polycyclic hydrocarbons, heavy metallic ions etc. are also carcinogenic. Hormones like testosterone and estrogens are known to cause prostate and breast cancer respectively. Chewing of beetles is known to cause mouth cancer. Cigarette and cigar tabacco smoking causes lip, mouth and lung cancers due to presence of a carcinogenic agent, benzpyrene and N-nitrosodimethylene. An animal protein-rich diet is known to cause cancer of large intestine. Dye workers using amlme dye have a high rate of bladder cancer.

Recently Dr. Leif Busk of Sweden reported that when high carbohydrate foods like potato chips and french fries are heated then a carcinogenic chemical, called acrylamide, is formed.

These oncoviruses have viral oncogenes (V-onc genes) which cause oncogenic transformation.

Essay # 4. Mode of Action of Carcinogens

Different carcinogen act in different ways and, on this basis, are divided into three categories:

1. Some carcinogenic agents cause oncogenic transformation. In this it is suggested that every individual has sone inactive cancer causing genes called Proto-oncogenes or cellular oncogenes (c-onc). These carcinogens cause alterations in the genetic material (DNA) which transform these proto-oncogenes into active oncogenes. These gene mutations cause loss of normal control mechanism and cells undergo abnormal cell growth and cell division.

2. Tumour promoters. These agents promote the proliferaton of the oncogenically- transformed cells and include certain growth factors and hormones e.g., in prostate cancer, testosterone acts as a tumour promoter.

3. Oncoviruses. These are cancer-causing viruses and may be DNA or RNA viruses e.g., Epstein-Barr virus. Herpes simplex type – 2 virus, etc.

This shows that the development of a cancerous tumour is associated with certain genes.

These cancer- associated genes are divided into three categories:

3. Genes which regulate the programmed cell death. Cancer is caused by mutant alleles of normal genes and do not respond to normal regulatory signals.

1. On the basis of their original tissue from where they arose, tumours are of three types:

Those cancer types which are located in epithelial tissues and the glands e.g., breast cancer, stomach cancer, lung cancer, skin cancer, pancreas cancer etc. Cancer of epithelial glands is called adenoma. These form about 85% of the total cancer-types. Melanomas are those carcinomas which involve the melanocytes of skin (pigment cells with melanin pigment).

Those cancers which are located in connective and muscular tissues derived from mesoderm e g, cancers of bone, lymph nodes and muscles. These are called lymphomas if affect the lymphatic system (e.g., Hodgkin’s disease in man which is characterized by enlargement of the lymph nodes, spleen, etc.), lipomas if affect the adipose tissue and osteoma if in bones. These form only 1 per cent of all the cancer types.

These are characterized by increased WBC count of the blood (upto 200,000-1000, 000/mm’) due to their increased formation in the bone marrow. This decreases the erythropoiesis and RBC count. These are most common types of cancer affecting the children below 15 years of age. Bone marrow transplantation is recommended.

2. On the basis of their spread, tumours are of two types:

(a) Benign or Non-Malignant Tumour:

These remain confined in the organ affected and do not spread to other body parts. It is so as these are enclosed in a sheath of connective tissue. In this type of tumour, cells are more adhesive. Though these are less troublesome but still need immediate removal as it causes severe pain and may become malignant.

These initially show slow growth, called latent stage, but later growth rate becomes very rapid causing overcrowding and damage to the normal cells. But later these enter metastasia stage (stage of secondary growth) in which the cancer extends to the neighbouring tissues like the roots of a tree. Small pieces of primary tumour break off and are carried to other body parts by the blood or lymph where these form the secondary tumours.

This process is called metastasis. So metastasis is the process of transference of cancerous cells from the site of origin to distant parts of the body. The most frequent sites of metastasis are lymph nodes, lungs, long bones, liver, skin and brain. Such tumours are very serious and cause the death of the patient due to increasing interference with the metabolic functions of the body and killing of more and more normal cells. Metastatic stage usually occurs after the age of 50 years when it is practically impossible to cure and proves to be fatal. 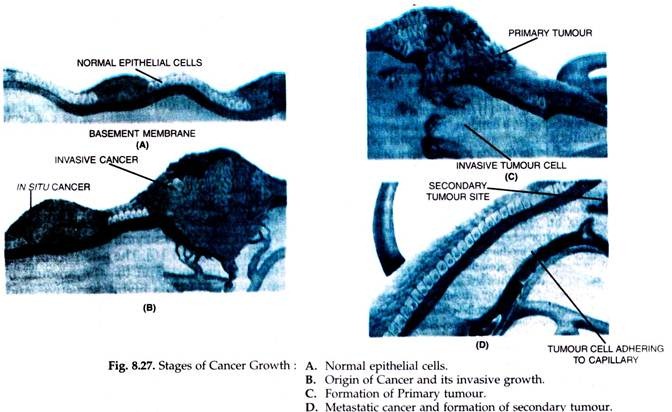 1. Presence of a persistent tumour in lip, tongue, breast etc.

2. Any wound with continuous bleeding.

3. Any wound not healing for long period.

5. Rapid change in appearance, form and growth of some warts on the body.

9. Excessive bleeding in the menses.

These signals are not always due to cancers but signal for early diagnosis.

Early detection of cancers is essential as at the later stages most of cancers become incurable.

1. Histopathological and cytologic methods. These involve biopsy and histologic examination of the affected tissue. Pap’s test is employed to detect cervix cancer.

2. DNA probe analyses by molecular biological techniques to detect those genes which make the person susceptible to certain cancers.

3. Tumor markers are biochemical indicators of the presence of a tumour and include cell surface antigens, cytoplasmic proteins, enzymes and hormones.

5. Detection of molecular changes in the cells with the help of modern techniques monitor.

7. Radiological techniques like X-rays, CT-scans and MRI scans may be employed to detect cancers of internal organs like kidneys and pancreas.

A new technique, called imaging mass spectrometry, has been developed to produce digital computer images to determine what new proteins are formed in tumour cells and what normal proteins disappear. This information may lead to new ways to stop the cancer from growing.

Cancer can be controlled in early stages and control depends upon the location and spread of the cancer.

It is so as the key to cancer treatment is early detection:

In this, the cancerous parts of the body are exposed to ionising radiations like X-rays which kill the cancerous cells. It gives good results in skin, lip, mouth and cervix cancers. Radiation therapy is employed in about 80% of cancer patients. But, this kind of cancer treatment may cause great damage to normal tissue present very close to cancerous tumour.

In this, a hormone-caused cancer is treated by another hormone which neutralizes carcinogenic hormone e.g., breast cancer can be controlled by testosterone.

It involves the removal of cancerous parts by operative methods. It is easiest method of cancer treatment. It cannot be employed against all the cancer types e.g., for leukaemias. But in most of cases it can be employed to reduce the tumour load before starting other therapeutic methods.

A number of chemicals like mercaptopurine, 6-aminopterin etc. are known to kill the cancerous cells or inhibit DNA synthesis and division in cancer cells. Catharanthus roseus, commonly called sadabahar, provides two anti-cancerous drugs: Vincristin and Vinblastin which are used against leukaemia. But majority of drugs have side effects like hair loss, anaemia, etc.

These anti-cancer drugs are divided into five categories (Table 8.23):

It is the latest methodology of cancer treatment in which the natural anti-cancer immunological defence mechanisms are strengthened e.g. in radioimmunotherapy, radioisotope-linked monoclonal antibodies are used for the treatment of cancer γ-interferons are used as biological response modifiers which, when given, stimulate the immune system and help in destroying the tumour. 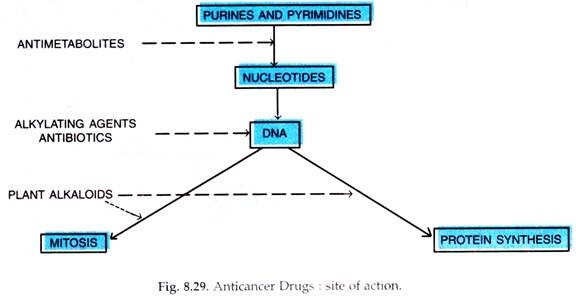 Researchers are going on to develop an anti-cancer vaccine.

Essay # 9. Theories of Origin of Cancer

This theory states that certain harmful but unexpressed proto- oncogenes become active to oncogenes which cause the loss of the control over growth and division leading to the development of cancerous tumour. When such abnormal genes are somehow repressed then remission occurs. Genetic basis of cancer was explained by Michael Bishop and Harold Varmus.

It states that abnormal growth, characteristic of cancer cells, is a reversion to an evolutionary stage of growth, called α-state, where the cells merely proliferate rather than performing specific function.

Regardless of the hypothesis, the ultimate trigger is deformation of the DNA structure.

In a recent survey of the trend in mortality from cancer in USA, it has been reported that upto 90% of all such deaths are due to potentially avoidable factors. So our cancer control programmes should concentrate on primary prevention and early detection and not merely on treatment-oriented approaches.

The public health campaigns about the relationship between cigarette, tobacco and lung cancer are beginning to prove successful and cigarette consumption has started declining.

2. Protective measures against toxic pollutants of the industries (against lung cancer).

3. Prophylactic use of drugs (against breast cancer). 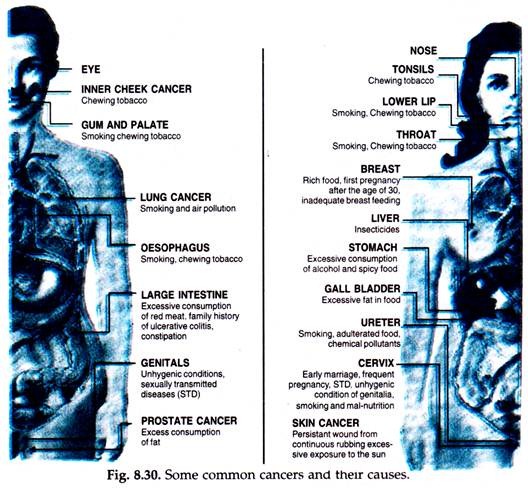