The term population explosion refers to the phenomenon of a rapid increase in population which tends to outstrip the growth of national income and retards the progress in per capita income.

It is indicative of a situation where the economy is not capable of coping with the needs to save and invest enough for rapid accumulation necessary for the achievement of a take off stage. The economy, therefore, remains in the grip up of a vicious circle of poverty.

The consumption and nutrition standards of the population are low it enjoys a poor health and low productivity. The phenomenon of population explosion is associated with a high birth rate which for outstrips the death rate. In a stagnant economy both birth rate and death rate are high and the next increase in population is zero or very low during the early stage of economic growth.

The following table shows the population of India and its growth rate during 1901-1991: 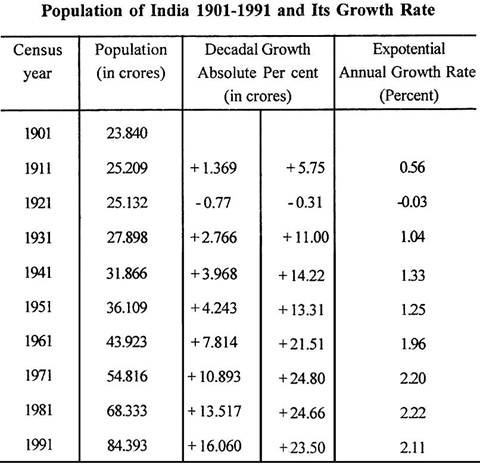 In the decade of 1911-21 many causes lead to reduction off population. But after that there is constant growth, in both absolute and relative terms. Hence, the year 1921 is called the year of Great Divide. The second stage of transition began from this dividing milestone.

From the table it is evident that Indian population in 1991 registered a rise, absolute and relatively both. In absolute term, the population increased to 84.3 crores and in relative terms, the growth rate was 23.0% in 1991. Growth rate during the decade 1971-81 according to census of 1981 was 24.66%. This shows that India is still passing through the second stage of demographic transition.

High birth rate continues to prevail because of the following reasons:

The practice of early marriage is a potent cause of rapid increase of population in India. It has been estimated that about 80 per cent of girls in India are married during the most fertile period of 15 and 20 years of age. In sharp contrast to this early reproduction age in India, the percentage of unmarried women aged 30 in U.K. and U.S.A. is 41 and 23 respectively.

Tropical climate of this country is also responsible for early puberty, her joint family system; the institution of polygamy and the existence of social institutions causing degradation of women have all be further responsible for her rapid growth of population.

Cases have not been rare when poor Indian villagers have welcomed further addition to their families in the hope of putting the new comer to work at an early age so as to supplement the family income.

4. The Age and Sex Composition of the Population:

Preventive checks are practically non-existent in India. Marriage is universal. Birth control measures are seldom applied because of the ignorance, conservatism and fatalism of the people. As a result the birth rate is among the highest in the world. According to studies based on the census data the birth rate which was about 41 per thousand and in 1961, fell to only 37 per thousand by 1981 in a period of intensive family planning efforts of the government over these two decades.

In the absence of preventive checks, positive checks are in operation. Epidemics spread claiming millions of victims. There is heavy infantile mortality and high maternal mortality at reproductive age. One out of every four children born in India dies in the first year.

A sharp fall in death rate in India is caused by rapid improvement in medical and health facilities. Invention of new medicines and methods prevented many epidemics and diseases such as Cholera, Plague, malaria, Smallpox etc. Maternity and infantile deaths are also reduced due to prenatal and after care facilities.

Another main cause of decline in death rate is control on famines. Days are over when almost annuals droughts used cause death-toll of millions. Because of administrative vigilance and efficient means of transport, famines cause no more dread and destruction. Even the worst famine of century in the year 1987-88, could not take a single victim.

It is hoped that India may enter the third stage of transition when both the rates are low and population becomes almost stable.

In the industrially advanced countries of Western Europe, economic development was to a great degree asserted by the rapid growth of population. The increase in number of people provided the economy with additional labour force on one side and expanding market on the other.

At the same time huge amount of natural and other economic resources could not be exploited for the lack of labour force, fast increasing population was indeed a boon to these countries. And the expanding market which was a necessary consequence of increase in population and the consequent rise in demand would rapidly absorb the increasing volume of output turned out by the newly established and expanding industries.

Thus the rapid growth of population is associated with the initiation of the process of economic development in these countries. However, in the underdeveloped countries of today, increasing population is more of a hindrance to the development of the economy.

This low growth of per capita income is directly due to the rise in population during this period, if India’s population continues to increase at the present rate, i.e., 2.5 per cent per annum for the next few decades, the increase in per capita income would be extremely low and India would not be able to come out from the vicious circle of poverty and the process of economic development would be retarted.

The supply of food needed has direct relationship with the mouths to be fed. Thus, in India with the increase in population, the demand for food grains has also gone up.

Because of this, resources have to be devoted to increase the supply of food grains, which otherwise could have been channelised in various investment activities. Further, since India has not been self-sufficient in the matter of food grains, they have to be imported. Had the demand for food grains been less, the foreign exchange saved would have been used for importing capital goods.

5. Problem of Unemployment and Under-Employment:

India has been facing the grave problem of unemployment and under­employment. Inspite of additional care taken during five-year plans to generate additional jobs the back-log of unemployed is constantly increasing. This is simply due to rise in population at an alarming speed. All this necessitates a significant proportion of the national resources to be used to expand employment opportunities to absorb the increasing Labour force.

Since an increase in population reduces per capita income and lowers the standard of living of the masses, it makes the people less efficient. People cannot be physically fit and mentally alert if they are not even provided with basic necessities of life. As inefficiency creeps in, productivity is reduced thereby hampering the development of an economy.

The rural areas become the worst suffers by the rapid growth of population. It reduced per capita availability of land. It results in sub-division and fragmentation of holdings, decline in productivity and disguised unemployment.

To conclude, a rapidly increasing population aggravates the food problem, increases the unemployment situation, reduced per capita income, increased the proportion of unproductive people, hampers capital formation and makes the people inefficient. Therefore, an all-out effort has to be made to reduce birth rate through a comprehensive programme of family planning so that sufficient resources are released for the economic development of the country.