The family Typhaceae is a monotypic family consisting of only one genus Typha and about 15 species distributed in tropical and temperate regions of the world. In India, the family is represented by 2 species — T. angustata Chaub. and Bory and T. elephantina Roxb.

The type genus of the family is Typha. 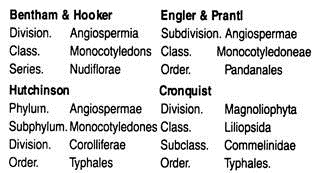 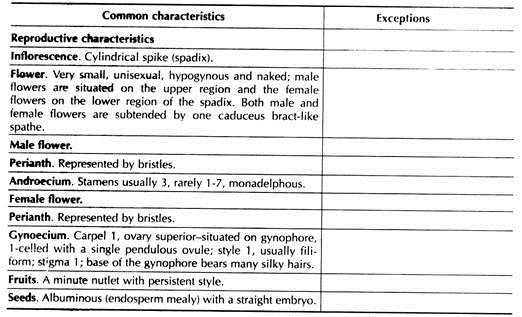 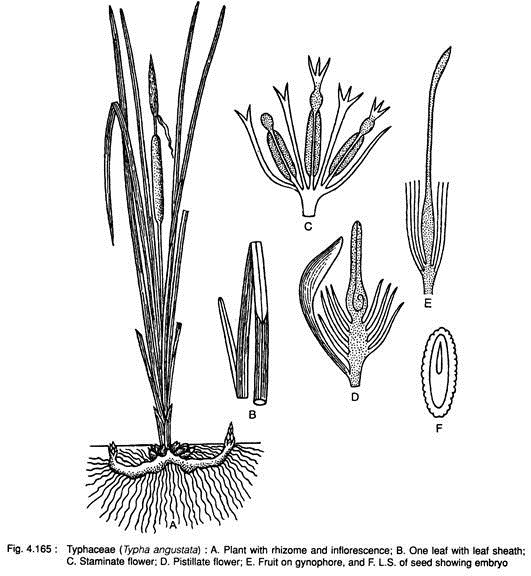 The family is closely related to Pandanaceae and Araceae and is readily differentiated by its very long, linear and erect leaves and also the dense cyclindrical spike.

Economically, the family is not so important, but the long leaves of the 2 species — T. angus­tata and T. elephantina, are woven into flat sheet ­like structures and used in thatching of huts, boats, temporary shades etc. The pollens of T. angustata are sometimes made into cakes and mostly used by the poor people.

The family Araceae contains 104 genera and 3,040 species, grows mostly in the tropical regions of the world, out of which 24 genera and 136 species are found in India.

The type genus of this family is Arum. 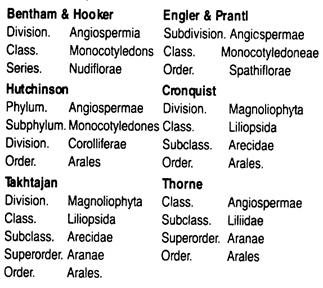 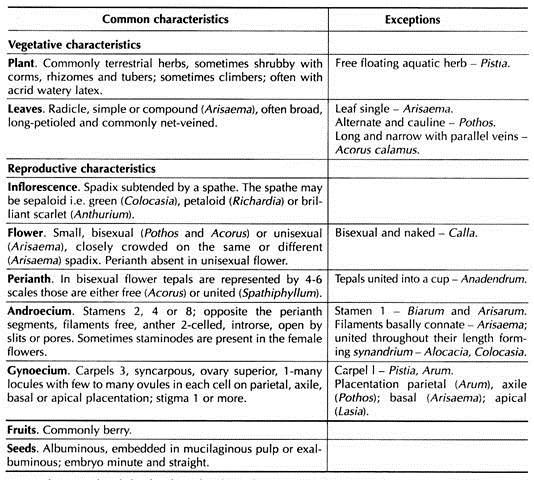 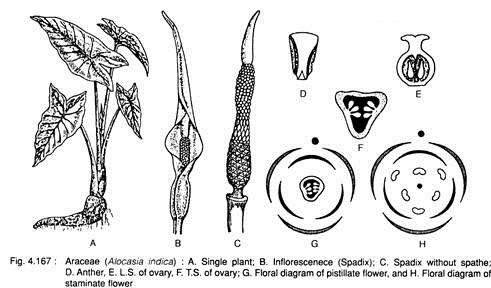 The family Araceae is closely related to Palmae (Arecaceae). It is also related with some members of the family Liliaceae.

i. Tuberous; leaves entire, 3-5-lobed, cordate or hastate or pedate; flowers and leaves present together…………………………… Typhonium.

iii. Herbs usually tall, coarse; leaves and scapes arising from the rhizome; leaves may be peltate; spadix with a barren appendage, not adnate to the spathe –

The members of this family are important in respect of food, medicines and ornamentals:

1. Alocasia indica, A. cucullata. The plants are cultivated for fleshy root stocks used as vegetables.

2. Amorphophallus campanulatus (Ele­phant foot). The large corm of this plant is used after boiling or used as vege­table.

3. Colocasia esculenta (Syn. Colocasia antiquorum). The plant is commercially cultivated for the starchy tuber used as food. The tubers are used in the produc­tion of industrial alcohol. The young leaves are used as vegetable.

5. Remusatia vivipara and Xanthosoma niger. Both corm and leaves of the plants are used as vegetable.

1. Acorus calamus. The rhizome is useful in chronic stomach troubles and dys­pepsia. The aromatic volatile oil is used as insecticide against bugs, lice, etc.

2. Alocasia macrorrhiza. The juicy extract of the stem is used to relieve pain from scorpion attack.

3. Amorphophallus campanulatus (Ele­phant foot). The large corm of this plant is recommended for dysentery and piles.

1. Acorus calamus var. variegatus. The plants are grown in the garden for their ornamented leaves.

2. Alocasia indica var. metallica and A. lowii. The plants are grown in the gar­den for beautification.

3. Arisaema atrorubens. The plants are cultivated in the garden for their beauti­ful and attractive spathe.

4. Caladium bicolor and C. picturatum. The plants are cultivated in the garden for their thin coloured leaves.

5. Colocasia esculenta. Some varieties (Elephant’s ear) are grown in garden and also in tubs for their ornamental leaves.

6. Dieffenbachia picta. The plants are grown in tubs for their spotted and variegated leaves.

7. Pistia stratiotes (Water lettuce). These are floating herbs grown in aquaria, and also in garden water.

8. Pothos aureus (Money plant). Some varieties are climbers having variegated leaves, cultivated in the garden.

The type genus of the family is Alisma. 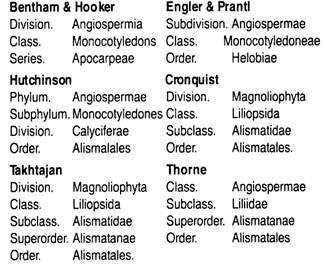 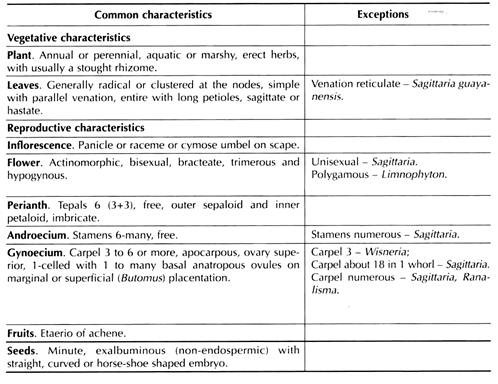 6. Carpels few to many, apocarpous.

7. Fruits are etaerio of achene. 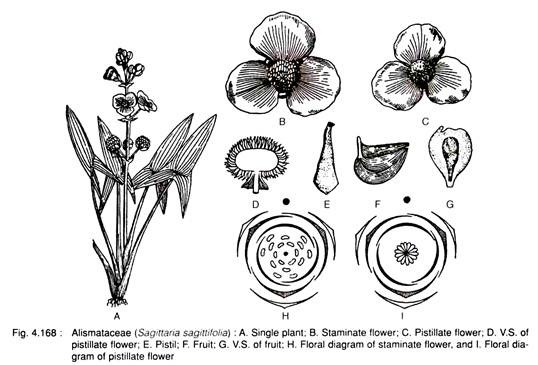 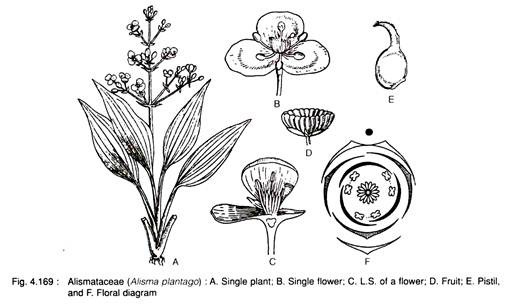 The family Alismataceae is closely related to Ranunculaceae and also with Commelinaceae. Takhtajan (1959, 69) concluded that the order Alismales is linked with Nymphaeales. Further, he pointed out that there is no essential diffe­rence between the flowers of the Alismatales and Cabombaceae. Cronquist (1968) also had the same opinion.

The family Cyperaceae includes 122 genera and 4,500 species, distributed widely throughout the world, out of which 22 genera and 405 species are found in India.

The type genus of the family is Cyperus. 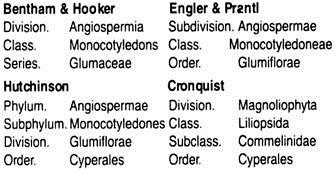 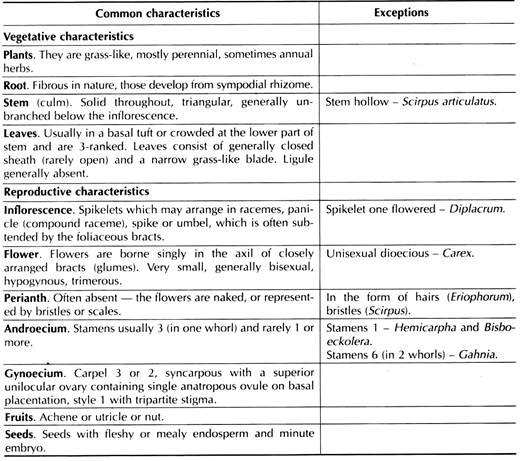 3. Leaves crowded on the lower part of the culm; 3-ranked in a tristichous (⅓rd phyllotaxy), without ligule,

4. Flowers are in spikelets, 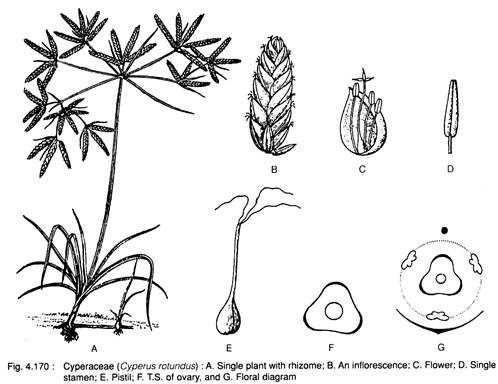 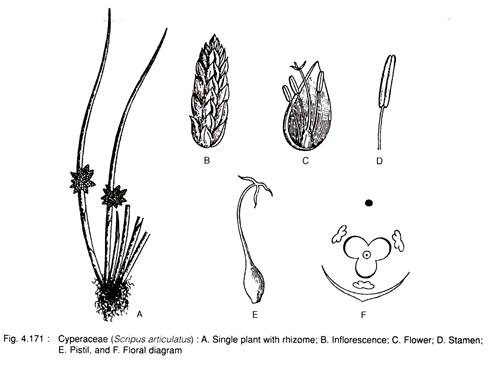 The family is closely related with Gramineae (Poaceae). The chemical similarities between the two families (Cyperaceae and Gramineae) indi­cate their phyletic unity than convergence (Cron­quist, 1981) and the Cyperaceae have been derived from Juncaceae (Takhtajan and Cronqiust).

I. Ovary and fruit enclosed in a utricle … Carex.

II. Ovary and fruit not enclosed in a utricle –

ii. Style 3-fid; rachilla of spikelets persis­tent; fruit trigonous; perennial or annual herbs; leaves all towards the base of stem or sometimes a few cauline, occasionally reduced to sheaths ……………. Cyperus.

2. Flowering glumes spirally arranged; base of style passing gradually into fruit and con­stricted or articulated; glabrous herbs, often tall, leafless or leafy at the base only; stem terete, trigonous or triquetrous … Scirpus.

The family is of little importance from the economic point of view.

Some uses are given:

i. Plants like Cyperus esculentus and Scirpus grossus var. kysoor are culti­vated for their tubers.

ii. In China, the tubers of Eleocharis dulcis are edible and called Chinese water chestnut.

B. Medicine and Perfumery:

Dry tubers of plants like Cyperus scarious and C. rotundus are used in medicine; also in perfumery.

Many species of Cyperus, Carex and Kyllinga are used as fodder.

Plants like Rhynchospora corymbosa are used as green manure.

Plants like Remirea maritima are grown as sand binder.

Some species of Cyperus such as C. flabelli- formis, C. alternifolius etc. are grown as ornamental plants.

The family Gramineae is one of the largest and economically most important family in Plant Kingdom. It includes about 656 genera and more than 9,975 species, distributed widely through­out the world. About 239 genera and 1,180 species are found in India.

The type genus of the family is Poa. 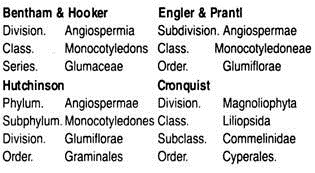 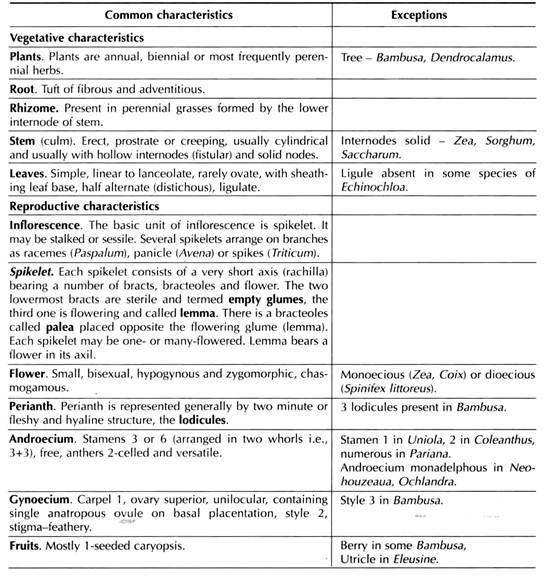 1. Stem is cylindrical and generally with hollow internodes (fistular), 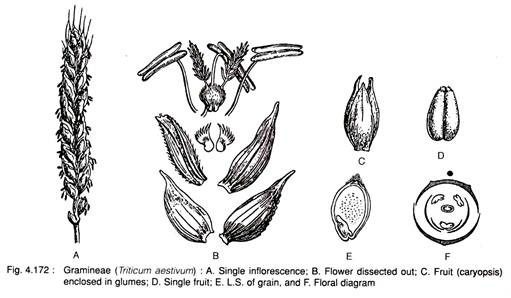 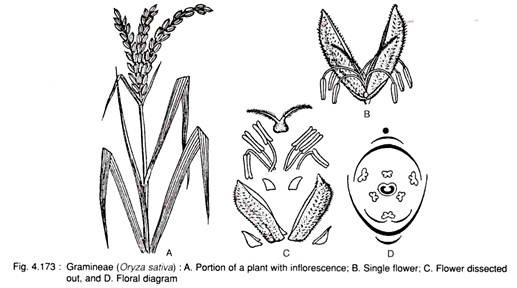 The family is closely related with Cyperaceae. The chemical similarities between the two families (Cyperaceae and Gramineae) indicate their phyletic unity than convergence (Cronquist, 1981). The Gramineae is considered to be a very advanced group of angiosperm evolved from primitive liliaceous ancestor.

I. Herbs, flowers not dioecious:

i. Mature spikelets surrounded by an involucre of bristles which fall off along with the spikelets…Pennisetum.

ii. Spikelets subtended by an involucre of bristles ……………… Setaria.

v. Annual or perennial grasses; leaves broad or narrow, flat, or rarely pli­cate; ligules 0 or hairy; glume II not fimbriate, glume III with a palea or quite empty………. Panicum.

i. Spikelets articulated on their pedicels and deciduous from them

b. Floating grass, diffusely bran­ched, rooting in dense masses at the nodes; glumes I and II absent …………….. Hygroryza.

a. Spikelets all similar –

Racemes of spikelets in com­pound panicles

Spikelets in alternating pairs or the lower solitary –

8. Spikelets inserted in notches or pits of a simple rachis

i. Spikelets solitary at the nodes of the spikes; plant of spikelets tangential to the rachis; annual or biennial culti­vated grass ………….. Triticum.

ii. Spikelets 2 or more, collected in fasci­cles at the nodes of the spikes; an annual cultivated grass … Hordeum.

The Gramineae is the most valuable family of the entire plant kingdom. They yield cereal food useful to mankind and fodder for the ani­mals — both domestic and wild. Besides cereals, they yield a number of products useful in our day- to-day life. These are sugar, paper, volatile and edible oils, fibres, alcohol, beverages, thatching and building materials, adhesives, plastics etc.

The commonly used cereals are:

Several grasses are used as fodder by domes­tic animals. Some — Poa, Festuca, Agrostis etc. are cultivated commercially as forage.

Name of some grasses used as fodder are:

Saccharum officinarum (Sugarcane, Akh, Ganna). Sugar and ‘molasses’ are prepared from the juicy sap of the stem.

Saccharum officinarum (Sugarcane, Akh, Ganna). The baggase (parts left after extraction of juicy sap) is used in the preparation of straw- board.

Some grasses are important for the source of important volatile oil used as mosquito repellent, and also used in perfumery and in medicines.

2. C. nardus (Citronella oil). The leaves are used to extract Lemon grass oil used in phenyle, thereby it is very popular in the market (white phenyle).

6. Oryza sativa. The edible rice bun oil is extracted from the husks.

These are tall arborescent grasses consisting of about 30 genera and 550 species; grow mostly in humid tropical regions. Some indi­genous genera are Bambusa, Arundinaria, Cephaiostachyum, Melocanna, Gigantochloa and Dendrocalamus, etc.

In addi­tion to the above importance the bamboos are grown to check soil erosion and also for soil reclamation in eroded regions:

1. Arundinaria racemosa. The plants are used as fodder for cattle. The leaves are the favourite food of elephants.

2. Dendrocalamus arundinaceus. The plant grows very fast and is used as a good source of raw material in paper industry.

3. Phyllostachys and Arundinaria. The plants are grown on pots and used for decoration of houses.

4. Phragmites karka (Common reed) and Arundo donax (Reed). Stem of both the plants are used for making musical pipes and many other things.

Saccharum spontaneum and Erianthus munja (Syn. Saccharum munja). The fibres extracted from the leaves are used for making ropes.

Saccharum officinarum (Sugarcane, Akh, Ganna). The byproduct of the sugar industry is the molasses used in the manufacture of indus­trial alcohol.

Culms (stems) of different species of Bambusa such as B. tulda, B. vulgaris are used either entirely or by splitting in the construction of houses. 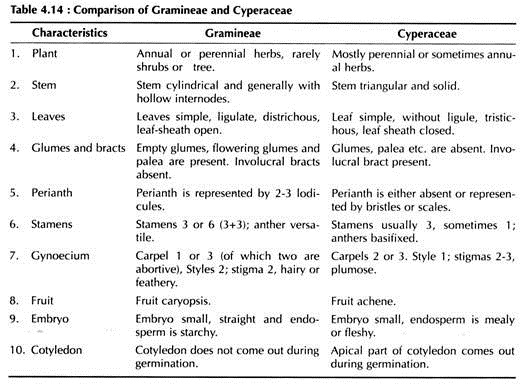